International Journal of Energy Security and Environmental Research (ISSN 2047-3354) is focusing on the study of energy security and environmental policy and their social, cultural, political, economic and business impacts. The Journal is equally interested in empirical and theoretical contributions. The Journal was founded in early October 2011, and will appear biannually. The first volume, issue one, was published in January 2013, by Markoulakis Publications. IJfESER is peer-reviewed and intends to maintain the highest academic standards.

Editorial: Geopolitics of energy security in Europe and beyond. By Diana Bozhilova and Tom Hashimoto p. vi

From Russia with Cold Feet: the Energy Charter Treaty and EU-Russia Energy Relations. By Amelia Hadfield and Adnan Amkhan-Bayno p. 1

Energy Dependency and Europe’s struggle to speak with a single voice – A Russian problem? By Julie Smith and Daniel Dugmore p. 17

The construction of the EU-Russia ‘Strategic Energy Partnership’:Clash of identities or where do the interests come from? By Olga Repyeuskaya p. 33

Does the SCO Energy Club have any future? By Meruert Mukanova p. 47

The Russian Arctic: An opportunity for the EU? By Evan Thompson p. 61

The Strategic Implications of EU Energy Diplomacy in Ukraine. By Ivaylo Gatev p. 97

Strengthening the EU’s Energy Remit: Hungary, Poland and the Presidency of the Council of the European Union in 2011. By Eamonn Butler p. 109

‘Solar Energy Zones’. A Complementary Regulatory Framework for enhancing Solar Energy Cooperation between North and South of the Mediterranean. By Ehab Salaby p. 125 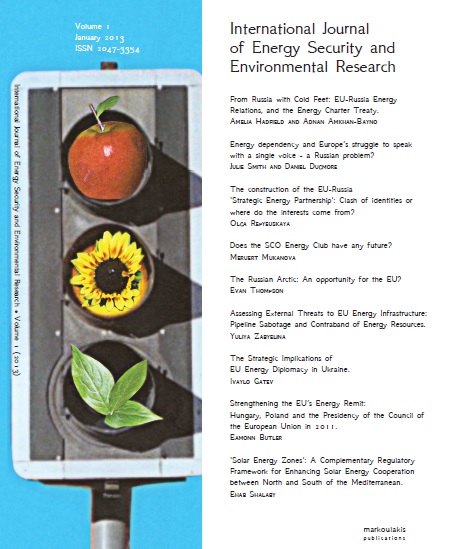